*Follow Me on Twitter @Saya_Underworld
*Follow me on Instagram https://www.instagram.com/saya_in_underworld
(Translated and arranged by Saya)
🌈💗Hi everyone! 😊💕thank you for your love and support for this blog! I am busy right now so the✨NEXT UPDATE will be in August✨
This happened when I was still a junior high school student.
We were on a summer holiday. I went fishing with three of my friends.
It was a bright sunny day, but on our way home,  the sky suddenly turned dark and we got caught in a downpour.
We ran to the nearest large tree to shelter from the rain.
But a split second later, the tree was struck by lightning.
All of this happened so fast that I was left disoriented for a few moments.
Pretty soon, though, I realized that I was in a very strange situation.
First, I noticed that all my friends were gone.
Secondly, I noticed that there was a goldfish scooping stall (like the one you would often see in festivals) in front of me. **
"Fancy playing goldfish scooping?"
The old man standing at the stall called out to me.
I sensed that I was stuck in a place which was not in the world I knew.
"How much?"
I don't know why I asked that question.
"One poi (paper scooper) equals to one year of your life, " replied the man.
I walked up to the stall and peered down into the fish tank.
I saw in there three goldfish, whose faces resembled those of my friends...
"You want to rescue your friends, don't you?"
The old man asked.
I nodded, instantly understanding my role in this world.
"Please...give me a poi."
"Sure. This is one year."
I don't mean to sound arrogant, but I am quite good at this kind of game that requires high level of concentration. So I imagined it would be a piece of cake for me. 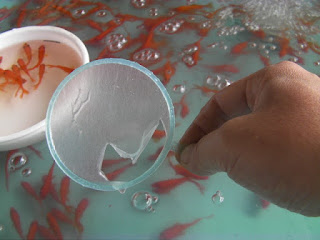 ......But soon I discovered that I was useless at this particular game. The poi was so fragile and tore very easily.
So far, I had rescued only two of my friends, but I had already wasted more than 60 poi.
"Now, this is your last poi (meaning the end of my lifespan) . "
I took it from him, determined that I would succeed this time no matter what.
This is my last chance! I know I can do this!
I will legit lay down my life for my friend!
I don't know if my strong determination worked magic, but this time I was able to rescue him with a surprising ease.
"Yes! I did it...!"
I lost my consciousness right after that.....
................
"Hey, wake up!"
"Don't die on us!"
"I've just been to that house over there and they are coming to help us now."
I heard some voices and opened my eyes.
"What ... You lot! You are alive?"
"We all woke up around half an hour ago, but you stayed unconscious."
One of them told me.
I felt my eyes well up with tears.
"Oh... I'm so glad you are all alive... I'm really, really glad..."
But why was I still alive? I thought I had used up all of my life.
It must have been all a dream.
But I still remember vividly the last words the old man uttered:
"You have done a really good job. Here, I will give you one extra goldfish as a reward." 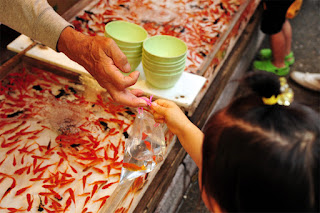