A Horror in a Multi-Tenant Building

*Follow Me on Twitter @Saya_Underworld
*Follow me on Instagram https://www.instagram.com/saya_in_underworld
(Translated and arranged by Saya)
This happened more than 14 years ago. At the time I was a second year student in junior high school. *1
On one Sunday, my two friends and I decided to go to the cinema together.
I will call my friends A and B.
The place where I lived was a sleepy little town, and it was a bit of an adventure for us countryside kids to travel to the bigger city where the cinema was located.
On the night before the trip, while I was at home feeling excited about it, I got a call from B:
"Sorry, I forgot I have a violin lesson tomorrow. I'll have finished the lesson by the time you guys are done watching the film. Let's meet up after that at the ticket gate of C___ (the name of the town where the cinema was) station."
B was a kid from a rich family, and he was learning the violin like all rich kids do.
I had hoped all three of us would watch the film together so I was a little disappointed, but I then thought to myself that it was OK because we could hang out afterwards; and I just went to sleep that day.
So the following day only A and I went to watch the film together.
After we finished, we started walking towards the station when A said, "hey, if we go to the third floor of this building, we can take the footbridge from there to the station."
Being a big town, it had footbriges about three floors high that connected the station to several buildings around it such as a department store.
I thought that might be a more convenient way to reach the station, so we decided to enter the building next to the cinema.
The building was a multi-tenant building, and housed a lot of small shops inside it.
We found a stairway and started going up the stairs from the first floor.
When we arrived on the third floor, we found there was no door that led to the shops.
I guessed that the floor was used as a storage space or something and that was why it was closed off to shoppers.
So I said, "shall we go back to the first floor and just use the normal road?"
But A said, "No, let's keep going. Perhaps we can get inside from the forth floor and go down to the third floor from a different stairway."
But the fourth floor didn't have a door either.
That forced us to go further up to the fifth floor, but we still didn't see a door.
Now we were annoyed rather than discouraged, and felt determined that we wouldn't stop going up until we found a door. 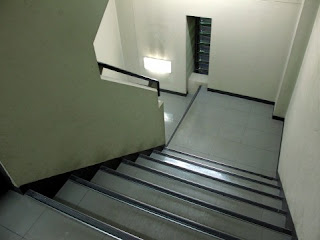 We had climbed up to the tenth floor when I realized something was wrong.
I had seen the building from outside and could recall its height; it couldn't have had more than ten floors.
However, A urged me by saying, "come on, hurry up." He seemed so anxious to go further up.
We continued to go up the stairs, but by the time we had reached the 20th floor, I knew for sure that something was wrong.
The stairs too had become different from before; they looked old and damp now. They were like those creepy mossy stairs you might see in a Resident Evil game.
By this time, I was already becoming quite scared, so I said to A,
"Let's turn back. This isn't normal. You think so too, right?"
A, who was going up the stairs ahead of me, said, "Hahaha, no, it's not normal." He didn't turn around but kept his back to me. 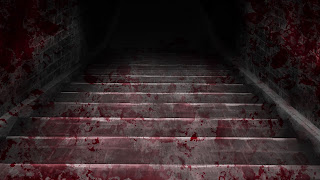 I thought he was mocking me, and became irritated.
"Why are you laughing? I said we should turn back!" I almost shouted at him.
But A again said to me, "Hahaha, no, it's not normal."
I became even more irritated by those words, but then I noticed that A's movement was looking a little odd.
Outwardly, he was just climbing up the stairs like before, and his overall appearance was the same as usual; but there was something odd about how he moved his body --- it looked awkward as if he was a puppet pulled by strings.
Each of his body part --- the right hand, the left hand, the right leg, and the left leg --- seemed to be moving independently of one another.
I don't know a better way to explain it, but the way he moved was just so disturbingly weird.
As soon as I noticed that, I was overcome by fear and stood petrified on the spot.
An instant later, A too stopped moving and wheeled around to face me.
"Hahahahahahaha, no, it's not normal, it's not normal. Hahahahahahaha."
He burst out laughing and I screamed.
The way his smile was shaped on his face looked as awkward as the movement of his hands and legs.
Not only that, the white of his eyes had disappeared and the enlarged pupils filled the whole of his eyeballs.
More than anything else, it was those pitch-black eyes staring down at me which made me scream.
I turned on my heels and rushed down the stairs in full throttle. I nearly tripped over my own feet a few times but I didn't stop running.
Before I knew, I was in a pharmacy on the first floor of the building. I couldn't remember how I got out of the stairway.
I was still in a panic and continued to run all the way to the station, without looking behind me.
When I arrived at the ticket gate of the station, B was there waiting for me.
He looked cross.
"You are late. It's been more than an hour since the film finished," he chided, but noticing that A wasn't with me, asked, " where is A?"
I felt a wave of panic rise in me again as I imagined A chasing after me with those strange movements, and I half forced B to go into a fast food restaurant with me.
I immediately told B what had happened just now.
But at first I was too upset and couldn't think straight; so in the middle of my story, B interrupted me a few times, saying, "tell me again. From the beginning."
I could see doubt in B's eyes; but gradually, as I continued talking, his expression became more serious. I think he understood that I wasn't trying to fool him.
Eventually, B suggested, "let's go back to the building."
I said no way, but B insisted, saying " we can't just leave A in there!"
When I heard that, I thought to myself, "yeah, that's true. Perhaps A has gotten possessed by something," and I agreed to go with him.
We used the same stairway to go up to the third floor, but this time we found a door leading to a CD store.
We then checked the fourth floor, and there was also a door which led to a video game arcade, and we could enter it like normal.
There were no more stairs after it. It was a four-storey building.
Puzzled, we decided to go home then, because we had some hope that A would just come to school the next day like nothing had happened.
Next morning I went to school but A wasn't there.
B arrived 10 minutes later and he looked pale and shaken. He told me he had a weird dream that morning.
The dream was about A. He was crying and walking barefoot in a forest, while muttering to himself, "it's not fair, it's not fair."
B said he knew that it wasn't just a dream, but he didn't know what he could do about it.
A few days later, as A still hadn't returned, he was reported missing to the police.
I went to the police with B, and we were asked questions about what happened on that day, but we didn't say anything about the strange occurrence.
Another month had passed by when A --- or more accurately his body --- was finally found.
I heard that he was found lying next to a mountain shrine, in a neighbouring prefecture, more than one hundred km from our town. His body was completely desiccated too.
Also, they discovered that he had been dead for over a month.
It was an extremely unpleasant experience for me at the time, but the memory of it gradually faded over the years.
However, I remembered it again when the other day I saw B for the first time in a long while, and we fell into a discussion about what might have happened to A.
Anyway, that's it for my story.
I haven't been to that cinema since then, but I feel like visiting it again now.
------------------------------------
*1 Junior high school --- Chu-gakko （中学校) in Japanese. Children attend junior high school  between the age of 13 to 15. So this means the author was 14 at the time.
The Japanese school system primarily consists of six-year elementary schools, three-year junior high schools and three-year high schools, followed by a two-or-three-year junior colleges or a four-year colleges. (Japanese Educational System)
*2 The picture shows Kamishikimi Kumanoimasu Shrine in Kumamoto.
See this article for more information
Inexplicable#3