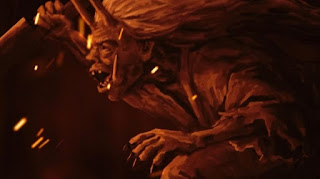 (Translated and arranged by Saya)

This happened to a young couple driving on a mountain pass.

The sun was already setting. Virtually no oncoming car could be seen, nor were there any lampposts.

While the man drove the car, his girlfriend, tired from a long drive, slept on the front seat beside him, wrapped up cozily in a blanket.
The man stared intently ahead into the dark, trying to keep fatigue at bay.

When they were half way through the mountain, he spotted a white sedan parked at a lay-by.
Without thinking, he slowed down his car.

He had known other couples to park their cars at such a place and stay overnight inside them, for they lacked money to stay in proper hotels.

He stopped the car and peered into the rear seat window of the car, out of curiosity.
But as soon as he did so, a door of the sedan suddenly opened wide, and a woman came out. Their eyes met.

Her eyes were boring into his.
Feeling awkward and a little embarrassed, he suddenly started the car to get away from the place.

He was still feeling her eyes on him, and a few seconds later, he looked into the rear-view mirror to see if she was still staring at him; then he gasped in horrified alarm.

The woman was chasing his car!

His feeling of embarrassment turned into panic, and he sped up the car.
He drove it as fast as he possibly could on a narrow mountain pass.
But the woman was still chasing him, although it was impossible for any human-beings to have kept up with such high speed.

In the rear-view mirror, he saw the woman's face illuminated by the red brake lights, and the sight made his hair stand on end.

The face was the exact copy of the face of Mountain Witch he saw in a children's book when he was a boy.
It was an ugly, wrinkled, demonic face of an old woman, with her hair wildly flying in the wind, closing in on her victim.
He started apologizing for god knows what, and stepped on the accelerator like crazy.

Before he knew it, he had arrived at the parking space of a convenience store at the foot of the mountain.
His girlfriend woke up, and he told her how he had just had a narrow escape from death.

She looked confused at first, but soon her expression turned into one of great shock.
A huge sense of relief washed over him, because by telling her the story, he felt like he was confirming to himself that he was safe now.

When he had finished telling his story, he found his girlfriend looking pensive, as if ruminating over what he had just told her.
"I had a dream." She finally spoke. "In the dream, I was chasing your car frantically, because you had left me alone in the middle of the mountain, and driven away. I yelled and screamed with all my strength, but you wouldn't stop and kept on driving.
For one moment, I seriously thought in my mind: 'I will kill him!' "

** Mountain Witch - Yamanba (or Yamauba: See Wikipedia ), in the original story. Yamanba is a yokai in the form of an old woman who lives deep in a mountain. She appears at first as a well dressed, benevolent lady who invites travellers into her hut for a night's rest. But during the night, when travellers are fast asleep, she attacks them and devours them.  Her true identity before she became a yokai is said to have been a priestess of a mountain god, or an old woman who was a victim of ubasute (the practice of abandoning elderly relatives in mountains during a period of famine: See Wikipedia).

I just found another good site on Yamanba😊 : 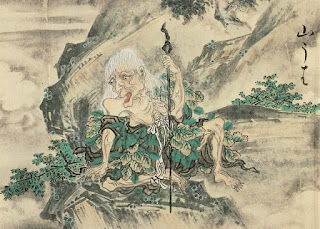 Click here for more stories under the same category ➡(Monsters)

This story reminded me of this➡(Mountain Road) and this video too➡(Snowy Roads are scary!) You might need to switch to the web version of the blog to watch the video.