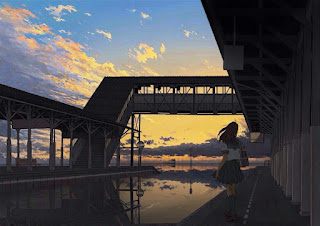 Whenever I see sunset, I remember a story my uncle told me.
One day he finished his work early.
When he arrived at the station closest to his home, it was still early in the evening, which was unusual for him.
As he was heading for home, he noticed a girl walking down the street towards him. She was holding an umbrella.
He thought that was odd because the sky was clear.
Then he noticed her school uniform was the one from the highschool he used to go as a boy.
Seeing the uniform again caused him to feel a twinge of nostalgia. As they passed each other, he glanced at the girl; somehow she looked familiar. 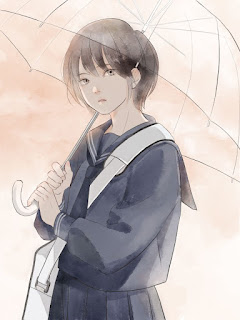 He spun around without thinking --- that was when suddenly the town, which had looked fiery-red from the sunset only a moment ago, became all greyish with light rain falling from the sky.
Not only that but the townscape also returned to how it used to be when he was a highschool boy.
The girl was taking cover from the rain under the roof of a second-hand bookshop (now gone), and she was talking to the boy standing next to her.
The vision was gone before he had time to react. The town was again glowing red from the setting sun.
He remembered who those girl and boy were.
The girl was his first love. The time when they met under the roof of the bookshop was the only time he remembered talking to her properly. It was a sweet, precious memory he cherished deep in his heart.
At the time my uncle was going through a very hard time in his life and was even on the verge of committing suicide.
But that vision filled his heart with such warmth that he felt like he could carry on with his life again.
------------------------
Happy New Year!
I wanted to start this new year with a story that gives you a sense of hope. 😊🌸✨
May your new year be filled with joy, happiness, many beautiful moments and treasured memories! Take care ✨✨💖💖💖
(You can read other stories under the label "Heartwarming too ✨⭐)
Heartwarming