The Reason Why He Turned Himself In 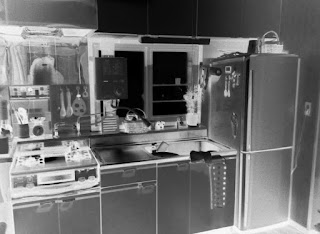 WARNING: This story is a bit gory! 😆✨
I have an uncle whose job is a prison guard.
According to him, the true job of a prison guard is not keep an eye on prisoners, but teach them human kindness.
So my uncle tries to listen to prisoners' stories whenever he has a chance.
Their stories mostly revolve around the crimes they committed, and those who turned themselves in often tell him what made them decide to do so.
One time, my uncle was in charge of a prisoner who told him the following story. I will call this prisoner Kato. **
***
Kato used to be a regular office worker.
He was in the prison for murder.
The person he murdered was his own wife.
After he murdered her, he didn't know what to do with her body, so he hacked it into chunks and kept them in the fridge.
Every night, when he came home from work, he would take one chunk of her body out of the fridge, and minced it, while he pulverised the bones using a food processor. Then he would flush both of them down a toilet.
He continued doing this for many days, until the most of her body was gone and only one more body part remained to be dealt with ---  that is, her head. But understandably, he couldn't bring himself to get rid of it so easily.
The head had remained in the fridge for several days when Kato had a dream.
In the dream, his murdered wife sat at the table in the kitchen, with her head bowed down.
Her head was so deeply bowed down that he couldn't see the expression on her face.
However, her hands, which rested on the table, were shaking.
As he watched, the shaking of her hands became more and more violent, until it reached the point where it caused her fingernails, followed by her fingers, to break into pieces and scatter all over the table.
Within a very short amount of time, her whole forearms disappeared in the same way. He watched in horror as copious blood gushed from the torn arms and the bones rattled on the table.
It was then that Kato woke up. He was drenched in sweat.
The dream left him in a state of shock that he couldn't move for a while.
As soon as he sufficiently recovered, he went to the kitchen. There he discovered the fridge door had somehow become ajar; and through the crack, his wife ---- who was now only a severed head ---- was fixing him with an angry stare.
Startled, Kato shut the door, and sealed it up with adhesive tape to keep it firmly closed.
But at this point, he hadn't yet thought about turning himself in to the police.
***
On the same day, as Kato still couldn't make up his mind about what to do with the head in the fridge, he decided to purchase another fridge.
It was a small fridge for one person, and he brought it home by himself without using a delivery service, so that no one would see his old fridge covered with tape.
That night, he had a dream again.
It was the same dream as before in that his wife sat at the table in the same place, but it began where the last dream left off.
Blood was already dripping from her torn arms.
This time though, it was her legs that were kicking the floor.
The kicking became more and more violent and frantic, and with that the sounds grew louder and louder too.
Bang!
Bang! Bang!
Bang bang bang!
Bang bang bang bang bang bang!!
The pieces of meat from the torn legs scattered all over the place as a pool of blood quickly formed on the floor.
On the table, the arms continue to shake, scattering meat and spurting blood.
Drops of blood splattered across Kato's cheeks too, but he couldn't move his body. He could only watch and silently pray inside his head: "please, please, let me wake up now!" But despite his desperate pleas, the nightmare mercilessly continued.
The whole room had become a mess, with splatters of blood gleaming darkly everywhere.
Then abruptly, those legs and arms stopped moving, and his wife slowly began lifting her head. 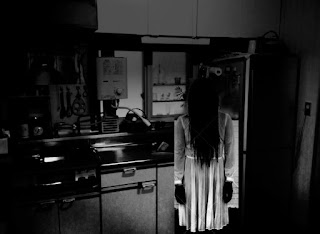 As she did so, her hair which had been hanging loosely about her, clung to her face, and from the gap between her strands of hair, he saw her eyes glaring up at him.
The moment her head was completely raised ----
"AAAaaaaahhhhhgh! Give! Me! Back! My bodyyyyyyyyyy!"
--- her deafening scream resonated in the room.
It was this scream which finally woke him up. Like the last time, he was soaked with sweat.
The dream was the catalyst he needed to stop dithering and get rid of the head. He sprang out of bed and went to the kitchen, but his motivation evaporated altogether the moment he saw the fridge.
The many strips of tape that had securely kept the door shut had been pulled apart, and his wife's head had dropped from the fridge. Her eyes were wide open, and they were glaring at Kato.
It dawned on Kato then that there was no escape from it, and he decided to turn himself into the police.
***
My uncle concluded the story by adding the following words:
"I learned from this that the grudge of murdered souls would live on, long after their bodies perished."
--------------------------------
** Kato (加藤) --- the original text just referred to him as "A," but I thought replacing it with a proper name would give you a smoother reading experience. 😆✨ Kato is also one of the commonest surnames in Japan, along with Sato (佐藤) and Suzuki ( 鈴木). Suzuki, by the way, literally means "Bell (suzu) Tree (ki)." 🔔🌲
🧡You might also like to read this one:
The Severed Head
Apparition #2 Dream